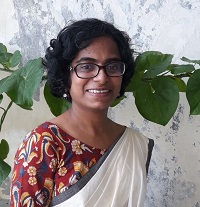 Sophy K. Joseph is currently Post-doctoral Fellow in the project, focusing her studies on ‘Paid Domestic Work. She is Assistant Professor of Law at the National Law University Delhi since 2013. Her subjects of teaching are Labour and development and Legal History at the University. Her main subject areas of research include Legal Anthropology, Unorganised sector and the Labour, Globalization and Labour rights and Alternate IP and human rights.

She completed her Ph.D on ‘Farmers’ rights in Neo-liberal India’, wherein she analyzes the impact of legal policy reforms during ‘second green revolution’ phase on farmers’ customary rights and livelihood, particularly in the context of the extension of private property rights to plant varieties and seeds and migration of cultivators to the cities. She is involved in policy initiatives taking up issues of domestic workers, bonded labour, child labour, construction workers, contract workers and women workers. She had been part of various projects such as UNDP-GoI project on “Access to Justice for the marginalised- the construction workers at Noida”, drafting policy for ‘the Protection of Early Childhood Care and Development’, uniform legislation for informal sector, the Construction workers, Street Vendors and legislation for domestic workers. Her recent policy work included drafting Bill for Domestic Workers, titled, Domestic Workers Regulation of Work and Social Security Bill, 2017. This Bill attempts to regulate working conditions of the workers to protect their rights with dignity and to ensure end of the exploitation of the domestic workers. She has both international and national publications to her academic credit and has been part of various international and national conferences and workshops